Tag Archive for: University of Washington

You are here: Home / Blog / University of Washington 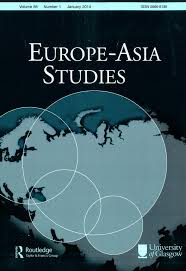 I am thrilled to be invited back to address the Advanced Practices Council (APC) of the Society for Information Management. The APC commissioned a research report on mobile app development in highly regulated industries. Over the last few months, I have collaborated with Paul Simon (CEO of iHear Network and my former graduate student at the University of Washington) on this research report.The presentation will take place on Jan 22, 2014 at the Intercontinental Buckhead in Atlanta, Georgia.

Mobile computing has the potential to be as disruptive to the status quo as the introduction of the modern Internet in the 1990s or the Model T was nearly 100 years ago. Organizations need to not only understand the risks of mobile computing, but develop strategies to incorporate it before it fatally disrupts their current business model. Some of the rewards of a well thought out mobile strategy include increasing revenues or new revenue streams, greater brand awareness and customer loyalty, and a new set of tools to increase employee productivity. Firms in highly regulated industries face an even more complex set of challenges when considering how to approach the mobile space. Highly regulated industries have additional constraints for developing mobile software because of the additional layer(s) of regulation that dictate the protection and communication of information. It is important for these businesses to implement comprehensive security solutions that go beyond standard industry regulatory systems. Since regulations always lag behind technological advancement, organizations should think more proactively about how their actions might trigger future legislative responses and how their actions impact the user’s expectations of privacy and trust. Although there are risks associated with an organization’s increased use of mobile devices, the rewards that could flow from developing, implementing, and continuously iterating upon a coherent mobile strategy are enormous. In a Pew Research Center study, 63% of adult cell phone owners use their cell phone to go online, 34% said they do most of their internet browsing on their mobile phone. It would be detrimental to the long-term viability of an organization to ignore such trends. Traditional linear modes of developing strategy will not be sufficient or flexible enough to keep up with the rate of innovation in mobile hardware, software, and mobile operating systems. Design thinking has grown beyond just a methodology for developing software products and experiences and now a growing amount of managers are using design thinking as a means of developing business strategy. This non-linear mode of strategy development is better suited for building a mobile strategy as it will provide greater insight into the needs and desires of end users, foster innovative and creative solutions, and provide greater flexibility to adapt to the changing circumstances caused by the disruptive forces of the mobile revolution. This enables the Chief Information Officer (CIO) to provide greater leadership that leads to both internal and external innovative opportunities for mobile strategy development.

I have been doing some reflection on my research interests and the connections between the various scientific domains in which I work. I will be on a panel, Working on Mars while Living on Earth – Balancing Demands across Disciplinary Boundaries, with Sandeep Purao (Penn State University), Ajay Vinze (Arizona State University), and Steve Sawyer (Syracuse University) at the 22nd Workshop on Information Systems and Technology where I will share some of my lessons learnt in doing interdisciplinary research and holding academic appointments in various disciplinary units from business schools to information schools and urban studies to public administration.

For a sneak preview here is a graphical description of my research spheres. 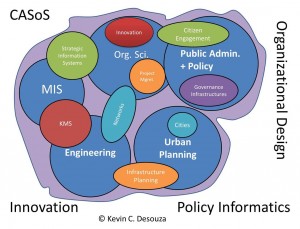 Below is a graphical description of my research trajectory mapped across various dimensions. 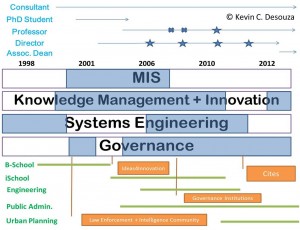 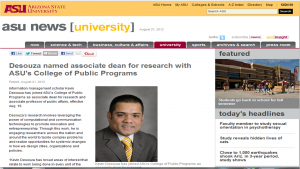 For the complete announcement, please click here. I am a Sun Devil!

Kristen Lau (University of Oxford) and I have a paper accepted for publication in Intelligence and National Security. Kristen was my graduate student at the University of Washington and is now pursuing a doctoral degree at Oxford. We began studying information management failures associated with nuclear non-proliferation efforts in 2009. We presented an early version of the paper at  the Centre for Science and Security Studies (CSSS) at King’s College London.

Abstract: Intelligence is a critical component for all counter-proliferation activities.  It allows us to assess and determine what makes up the current threat environment in terms of the proliferation of nuclear weapons and technology. The intelligence process as it relates to estimating nuclear capabilities or intentions is wrought with many challenges and complications. The denial and deception techniques employed by states running covert weapons programs and the dual-use nature of many weapons components create many difficulties for intelligence organizations. Additionally, illicit transnational networks obscure the situation further by serving as a source, for both nation states and non-state actors, for acquiring dual-use commodities and technologies. These challenges can lead to the miscalculation of a state’s capabilities or intentions. This paper presents a comparative analysis of three cases of nuclear proliferation: India’s 1998 nuclear tests, the exposure of the AQ Khan network, and Iran’s nuclear program. We examine the lessons learned and propose recommendations for future counter proliferation policy and strategy.

You might find our other paper of interest. It was published in the International Journal of Public Administration.

Volodymyr Lysenko and I have a paper accepted in Convergence: The International Journal of Research into New Media Technologies. Volodymyr is a former PhD student of mine that graduated from the Information School at the University of Washington. This paper draws on work he did while completing his dissertation. The paper is titled, Charting the co-Evolution of Cyberprotest and Counteraction: The Case of Former Soviet Union States from 1997-2011.

In this paper, we investigate the evolution of the modern information and communication technologies (ICTs) and the associated changes in protest-related tactics employed by two main stakeholders in the contemporary contentious political processes—dissenters and incumbent political authorities. Through in-depth investigation of the cyberprotest cases in the former Soviet states of Belarus, Moldova, Russia and Ukraine that occurred during the last decade, a coherent outline is developed of the co-evolution of ICTs-enabled protest tactics of the main counterparts in the contemporary political struggle in these countries. Particularly, it was found that there are at least three highly distinguishable levels of development of modern ICTs and the associated types of protest-related tactics employed by the main stakeholders in these events. We find that as soon as the authorities were able to effectively counteract the previous ICTs-enabled tactics by the dissenters, new developments in modern ICTs always empowered the latter to devise new effective strategies to overcome previously successful counter-revolutionary measures of the political authorities.

Reference: Lysenko, V.V., and Desouza, K.C. “Charting the co-Evolution of Cyberprotest and Counteraction: The Case of Former Soviet Union States from 1997-2011,” Convergence, Forthcoming.

I have (finally) created a Google Scholar profile. Please see here for my profile. 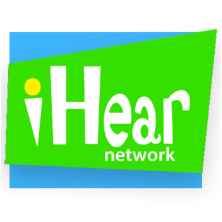 I have entered into an agreement with the management team of iHear Network to join their advisory board. I am excited to help iHear Network realize their vision of developing an innovative app for smart phones. The iHear app uses text-to-speech integration to connect users to relevant stories, news, and conversations. iHear Network recently appointed Paul Simons, a former University of Washington iSchool graduate student of mine, to serve as the CEO. Please click here for the press release – iHear Network Press Release.

Virginia Tech released the following press release on my new role at the University (Click here to access the press release – LINK).

NATIONAL CAPITAL REGION, Aug. 18, 2011 – Kevin Desouza has been named director of theMetropolitan Institute, a center in theSchool of Public and International Affairs in the College of Architecture and Urban Studies at Virginia Tech.

Desouza was most recently an associate professor at the University of Washington’s Information School and has held adjunct appointments in the university’s College of Engineering and at the Daniel J. Evans School of Public Affairs.

“Dr. Desouza’s experience with major international corporations and government organizations on strategic management issues will be a great asset to the college and the university,” said Jack Davis, the Reynolds Metals Professor of Architecture and dean of the College of Architecture and Urban Studies.

Desouza’s work is internationally recognized and he has conducted research and lectured across the world. He holds a visiting professorship at the University of Ljubljana and has held past appointments at the Center for International Studies at the London School of Economics and Political Science and the University of the Witwatersrand in South Africa, among others.

In addition to his professorship, Desouza founded two research institutes at the University of Washington, the Institute for National Security and Research, and the Institute for Innovation in Information Management.

Desouza has authored, co-authored, and/or edited nine books and over 90 articles. He has also been invited to advise and consult for several major international corporations and government organizations, focusing on strategic management issues ranging from management of information systems, to crisis management. He has given over 40 invited talks and received over $1.2 million in research funding from both public and private organizations. He is also a fellow of the Royal Society of Arts (UK). Desouza received his Ph.D. from the Liatuad Graduate School of Business at the University of Illinois at Chicago.

In addition to directing the Metropolitan Institute, he will also hold an associate professor appointment at the Center for Public Administration and Policy in the School of Public and International Affairs in the College of Architecture and Urban Studies at Virginia Tech. He is also serving on the Presidential Task Force working on Virginia Tech’s long range plan.

He will be moving to the National Capital Region in August to begin his new position.