Tag Archive for: University of Illinois at Chicago

You are here: Home / Blog / University of Illinois at Chicago

Sally and I have  just created our second endowment at the University of Illinois at Chicago. This gift will support students of any major who excel academically and who go beyond the classroom to make a positive impact through community service and leadership in student organizations. - See more at: link.

I have (finally) created a Google Scholar profile. Please see here for my profile. 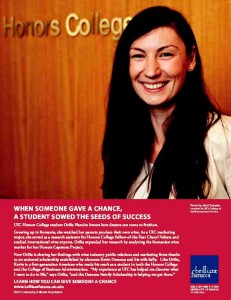 Otilia Flandro is the first recipient of the Desouza Family Scholarship. Otilia is currently completing her degree in marketing at the College of Business Administration at the University of Illinois at Chicago (UIC). She is interested in international marketing of Romanian wines.

Virginia Tech released the following press release on my new role at the University (Click here to access the press release - LINK).

NATIONAL CAPITAL REGION, Aug. 18, 2011 – Kevin Desouza has been named director of theMetropolitan Institute, a center in theSchool of Public and International Affairs in the College of Architecture and Urban Studies at Virginia Tech.

Desouza was most recently an associate professor at the University of Washington’s Information School and has held adjunct appointments in the university’s College of Engineering and at the Daniel J. Evans School of Public Affairs.

"Dr. Desouza's experience with major international corporations and government organizations on strategic management issues will be a great asset to the college and the university," said Jack Davis, the Reynolds Metals Professor of Architecture and dean of the College of Architecture and Urban Studies.

Desouza’s work is internationally recognized and he has conducted research and lectured across the world. He holds a visiting professorship at the University of Ljubljana and has held past appointments at the Center for International Studies at the London School of Economics and Political Science and the University of the Witwatersrand in South Africa, among others.

In addition to his professorship, Desouza founded two research institutes at the University of Washington, the Institute for National Security and Research, and the Institute for Innovation in Information Management.

Desouza has authored, co-authored, and/or edited nine books and over 90 articles. He has also been invited to advise and consult for several major international corporations and government organizations, focusing on strategic management issues ranging from management of information systems, to crisis management. He has given over 40 invited talks and received over $1.2 million in research funding from both public and private organizations. He is also a fellow of the Royal Society of Arts (UK). Desouza received his Ph.D. from the Liatuad Graduate School of Business at the University of Illinois at Chicago.

In addition to directing the Metropolitan Institute, he will also hold an associate professor appointment at the Center for Public Administration and Policy in the School of Public and International Affairs in the College of Architecture and Urban Studies at Virginia Tech. He is also serving on the Presidential Task Force working on Virginia Tech's long range plan.

He will be moving to the National Capital Region in August to begin his new position.

I just returned from a wonderful trip to Chicago. During my visit, I had the opportunity to talk with senior leaders of the University of Illinois at Chicago. At a special event called Celebrating the College of Business Administration (CBA), I was honored by being inducted into the Alumni Leadership Academy (ALA) as part of the 2011 Class.  "The ALA celebrates those alumni who best exemplify the College of Business Administration's commitment to leadership, teaching, research and service. Inductions to the academy are held every year to honor outstanding CBA alumni whose contributions in these areas raise the stature and standing of the college."[1] I dedicated my award to the undergraduate advisors I had during my time at the CBA.

Last December, Sally and I created the Desouza Family Endowment at the University of Illinois at Chicago. Here is the press release from UIC. The Desouza Family Endowment will support a yearly scholarship given to a student at the UIC Honors College.  This scholarship will support academic excellence and show appreciation for students’ contributions to the UIC community.  We believe that all students should receive encouragement for their dreams and aspirations, through support of their undergraduate studies. We hope to support the best and brightest at UIC – students who not only excel academically but who also go beyond the classroom and make a positive impact on the UIC community through community service and leadership in student organizations.

See here for the UIC News Feature on the scholarship.